Evolution of SAVLIV Drops : A unique Formula for All Liver Disorders 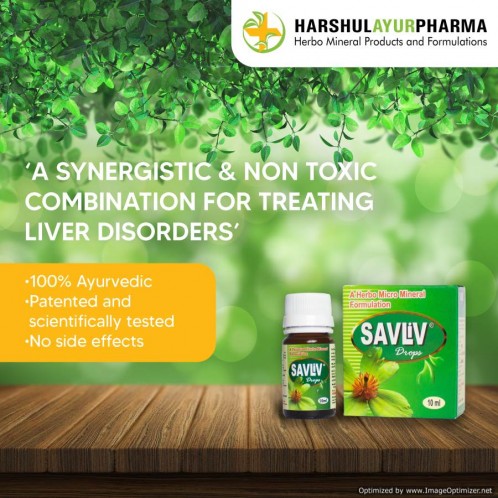 In developing countries contaminated food, water, unsanitary environment and unhygienic manner of living, due to illiteracy and consumption of alcohol are some of the causes of liver ailments. These ailments include Jaundice, Hepatitis, Cirrhosis of liver which result into anorexia, mild fever, nausea and vomiting, oedema on foot, pruritus, debility, anaemia and constipation. Liver disease accounts for approximately 2 million deaths per year worldwide, 1 million due to complications of cirrhosis and 1million due to viral hepatitis and hepatocellular carcinoma. Cirrhosis is currently the 11th most common cause of death globally and liver cancer is the 16th leading cause of death; combined, they account for 3.5% of all deaths worldwide. Cirrhosis is within the top 20 causes of disability-adjusted life years and years of life lost, accounting for 1.6% and 2.1% of the worldwide burden. About 2 billion people consume alcohol worldwide and upwards of 75 million are diagnosed with alcohol-use disorders and are at risk of alcohol-associated liver disease. Approximately 2 billion adults are obese or overweight and over 400 million have diabetes; both of which are risk factors for non-alcoholic fatty liver disease and hepatocellular carcinoma. The global prevalence of viral hepatitis remains high, while drug-induced liver injury continues to increase as a major cause of acute hepatitis. Liver transplantation is the second most common solid organ transplantation, yet less than 10% of global transplantation needs are met at current rates. Today, a large number of drugs are available for providing relief in liver disorders, but it is certain that modern drugs are inadequate in the treatment. However, the traditional Indian Ayurvedic system has the possibility of offering reliable, effective and affordable options with no side effects on the human body.

Liver is one of the most important organs of the human body and is responsible for a good digestive system, high level of immunity and a blooming health. Vastly known in medical science as the “chemical factory “of our body, the liver plays a key role in ensuring proper digestion of the food which we take by producing necessary enzymes in the system. Considering the importance, it is must to keep liver healthy for a disease-free life, but with present day social and professional commitments, where one has irregular meal timings, food nurtured by the pesticides, consumes alcohol more or less daily, and may even have contaminated food or water, this simple requirement seems to be a distant goal. As a result, liver diseases like fatty liver, jaundice, hepatitis and liver cirrhosis have become very common in all age groups and economic sections of the society. Measures like liver transplantation at an advanced stage of liver ailments are available today but have a success rate of only 50-55 percent and that too with continued medication, for the entire life in most of the instances. There is indeed a requirement for a protective measure which can function as a shield for liver, safe for long duration usage without any side effect, along with being a potential remedy for the liver disorders. This protective/remedial formulation needs to be well researched, medically/scientifically tested, reliable, efficient and affordable.

Keeping above requirements under consideration, Late Shri Vimal Kumar of Ramnagar, Distt Nainital of Uttrakhand (India), a Bachelor of agricultural science and an ayurvedic enthusiast invented a revolutionary formulation and named it as SAVLIV (SAVe LIVer). Shri Vimal also founded Harshul Ayur Pharma at Ramnagar, a pharmaceutical company for production of many such reliable and affordable formulations. SAVLIV is prepared by Citrus Medica, Salsola Kali Linn and Cyparea Moneta, the ingredients which have been used for medicinal purpose in Ayurvedic medicinal system in India since ancient times. The formulation, along with being a potential liver functioning booster, is one of the best remedial options for all types of liver diseases even in advance stages and qualifies all requirements mentioned in the previous paragraph.

It took about 10 years for Shri Vimal to get the SAVLIV in proper form and the formulation started showing remarkably encouraging results when administered on the patients of the local areas around Ramnagar. Late Dr Kaushal Kumar (elder brother of Shri Vimal Kumar), a professor of Organic Chemistry did an analysis of the composition of SAVLIV at Gurukul Kangri University in 1994 and prepared a research paper claiming various benefits of the formulation with no side effects. The paper was published in the medical journal of TOHO University of Japan in 1994. Yet SAVLIV had to be tested for its standardization, stability, heavy metal content, toxicity and efficacy. Shri Vimal Kumar met Dr C Sarvana Babu (then the head of research deptt Sri Ramachandra University Chennai) in 2010 who took up this vast research work as a project with a title ‘Scientific Validation of Safety, Protective and Curative Efficacy of a Folklore Medicine SAVLIV Developed for the Management of Hepatic Disorders- A Preclinical Study’. The research work got approved by the Deptt of Science of Tech, Govt of India and got completed with encouraging results. Later Dr C Sarvana Babu tested the efficacy of SAVLIV against hepatotoxicity induced by Carbon Tetra Chloride model (CCL4), Ethanol, Paracetamol and Methotrexate.

On the basis of vast research work and studies SAVLIV was granted a product patent as ‘a synergistic and non-toxic combination for treating liver disorders’ by the patent office Govt of India in 2021.

Why and how effective is SAVLIV against liver disorders

Numerous patients have been benefitted with SAVLIV; their testimonials can be gone through at the website of the company. The question probably may be asked that why SAVLIV is more effective than the other available products belonging to the field of liver disorders. Following are some of the reasons:-

Another very prominent question that how effective SAVLIV can be when administered for liver disorders can easily be answered on the basis of numerous testimonials received from the patients who have used this remarkable formulation. Some of these testimonials are available on the website of Harshul Ayur Pharma and can be referred to, even these patients can also be contacted in special cases with due permission. Following facts can be brought out about the efficacy of SAVLIV:-

Liver disorders, in today’s life style have become very common medical problems due to various reasons, even if one is living a fairly disciplined life. There is indeed requirement of a reliable, efficient and affordable option in this field which also needs to be safe for a long-term use with no side effects.  SAVLIV, due to its impressive and enormous research profile complete these requirements in toto. The evolution of this remarkable ayurvedic formulation for liver wellness has indeed been proved a milestone for the medical science, providing a blooming health to the mankind.