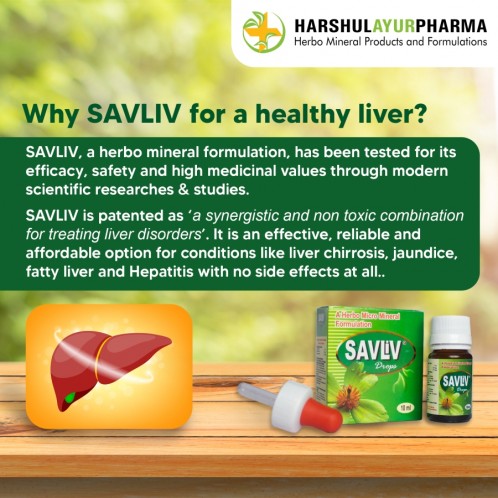 Jaundice is a type of liver disorder which if not addressed in time, may lead to major medical problems. In Jaundice there is a sharp increase in the level of disintegration of red blood corpuscles which causes increase in the percentage of Bilirubin in the blood.

State of Jaundice affects the liver considerably. Due to increase in the bilirubin, the colour of a Jaundice infected person’s eye, nails, palms and skin in general turns yellow. Loss of appetite, indigestion, weakness, dizziness and vomiting are some of the common symptoms of the disorder. The patient also feels restlessness and vomiting.

How SAVLIV works against Jaundice?

SAVLIV Drops, ‘a synergistic and non-toxic combination for treating liver disorders’ has reflected remarkable results in treating Jaundice. From the administration of first doze of SAVLIV, the patient gets relief from dizziness and vomiting. The appetite of the patient increases and with in 7-8 days the patient recovers from the state of Jaundice. With the effect of SAVLIV Drops the increased Bilirubin also decreases and comes down to normal level.

Why SAVLIV works against Jaundice?

SAVLIV is a synergistic combination of Citrus Medica, Salsola Kali Linn and Cypraea Moneta. To understand why SAVLIV works so well against Jaundice, we need to understand the medicinal properties of each ingredient in brief:-

Citrus Medica. Citrus medica or key lime is a source of Vitamin C. Its juice has been traditionally used to relieve stomach ailments, indigestion related issues and is also been used as an antiseptic. It has hepatoprotective properties as well.

Salsola Kali Linn. Salsola kali, a herb, is known to regulate the blood pressure. It is alkaline in nature and assists in maintain the acidic-alkaline balance of the body. It is also a potent antiviral element.

Cypraea Moneta. In traditional system of medicines, Cypraea Moneta, a marine organism, has been used as a medicine to cure various ailment especially related to stomach and in the treatment of Dyspepsia, Jaundice, enlarged spleen/liver, asthma, cough and also reported to be externally used as caustic in various forms of ointments.

Due to the medicinal properties of these three ingredients, SAVLIV in form of a synergistic and non-toxic combination has the ability of reducing the abnormally elevated levels of toxicity markers in liver disorders like Jaundice.

Through the  research work on SAVLIV it has been brought out that the herbo mineral formulation has the ability to reduce abnormally elevated levels of AST by 68.46%, ALT by 60.78%, ALP by 61.14% total Bilirubin by 38.62% and augmenting reduced Glutathione by 50.80%. Having a remarkable efficacy to treat liver disorders, SAVLIV has reflected unprecedented results in tests against paracetamol induced hepatotoxicity in HepG2 cells.

Jaundice is a liver disorder which if not addressed in time may lead to major medical problems. SAVLIV Drops is the safest and one of the most effective options against Jaundice.